Every year in late January or early February, we seem to get a week or so of lovely weather: sunny skies, temperatures in the 50’s that lure us out into the forest or onto the beach. And every year I succumb to the hope that spring is really on its way early this year, that the abiding gray will give way to blue, that the scent of moist air will get its floral infusion in February instead of April.

Cliff Mass’s weather forecast assures me that teaser season will soon be over; we’re due for rain in a couple of days. If past years are a good guide, we’ll then likely be under mostly gray skies through early June.

So after yesterday’s morning fog began to clear, it felt good to get out for a while yesterday in the sunlit forest, and to look closely at the new life that’s expanding sneakily under the radar.

The hellebore in my Easter garden is in full bloom, its broad pink blossoms facing coyly downwards where it’s easy to overlook them from our towering human heights. 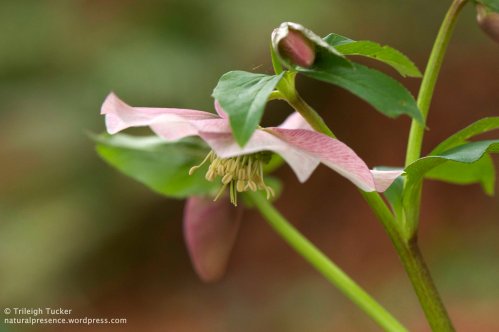 A strategically placed mirror reveals the veined exuberance hidden beneath that green veil: 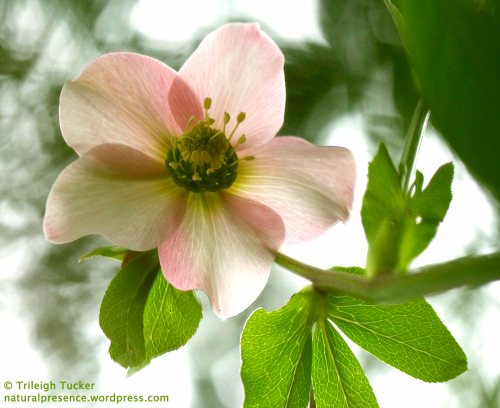 Hellebore blossom from below

But it was a budding witch hazel in my neighborhood park that wore worlds of jewels, each a minuscule aquarium bearing a forest within.

Dewdrop suspended from witch hazel.
Brown area at top of drop is the inverted image of the twig above the drop.

Forest on a pedestal.
(Image is inverted; dewdrop was suspended from a twig.)

And in a celebratory finale, this miniature Disneyland castle sprouts exuberantly atop a fencepost. 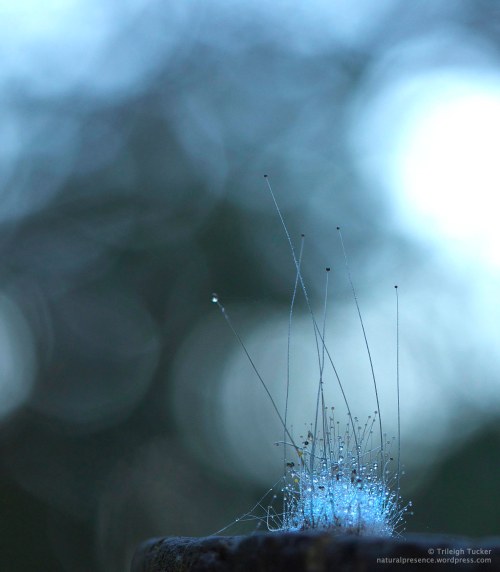 Mold mycelium with sporangiophores
(about 1/2″ across)
(Click here for closeup of lower part.)

Happy teaser season! May your senses open wide to its worlds of wonder.

(If you see an ad below this blog post, please note that I have no control over it or its contents. WordPress inserts ads into blogs of those who don’t purchase a “no ads” upgrade.)